Guruji Sanghasena Mahathera the founder of the Mahabodhi International Meditation Centre in Ladakh, will be in Malaysia from 26th October till 15th November 2013. Whilst he is here, we are inviting him to come to Samadhi Vihara, Shah Alam on Monday, 28th October @ 8.00pm to share his thoughts and words of Dhamma on a topic he is so passionate about:

He will talk about his charity projects in Ladakh in the Himalaya and the rest of India.

A brief biography of Guruji 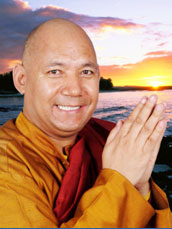 Venerable Bhikkhu Sanghasena was born in the remote Himalayan region of Ladakh – an ancient state located in the far north west of India, high on the Tibetan plateau. He was brought up within a deeply religious family, amongst people who followed the ancient Buddhist traditions and believed in peacefulness,humility and innocence as the natural way of life. At the age of seventeen he joined the Indian Army, where he developed a strong sense of personal discipline and responsibility.

1977 was a particularly significant year in his life, for this is when he felt the inner spiritual call and decided to leave the army. He left the mountains of Ladakh far behind him and became a committed disciple of the renowned Buddhist scholar and celebrated monk, Venerable Acharya Buddharakkhita Mahathera, the abbot of the Mahabodhi Society Vihara, Bangalore, South India.

In 1986 Venerable Bhikkhu Sanghasena founded the Mahabodhi International Meditation Centre (MIMC) in Ladakh. For the past 25 years Venerable Bhikkhu Sanghasena has tirelessly and selflessly worked to provide high quality education and safe shelter for underprivileged children, first-class healthcare for the sick and needy, empowerment and literacy programmes for women and other socially disadvantaged groups, a caring home for the aged and destitute, and many other humanitarian services. The site for much of Venerable Bhikkhu Sanghasena’s humanitarian and spiritual service work has been the 200 acres of moon-like desert that now form the impressive backdrop to the main Mahabodhi Devachan campus in Choglamsar, Ladakh.